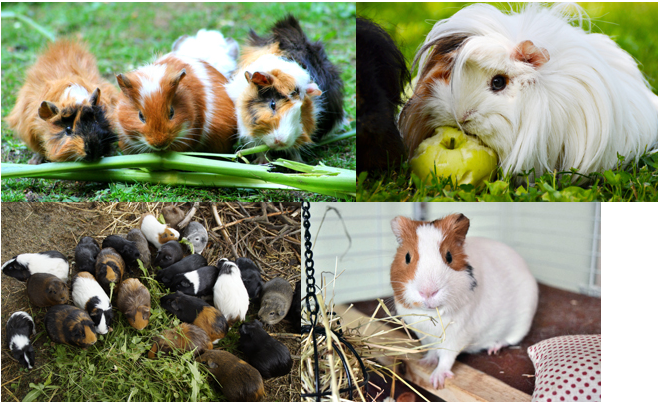 Guinea pigs are not really pigs, and they don’t come from Guinea. Guinea pigs are native to the Andes Mountains of South America. In all likelihood, the name was derived because they were first introduced in Europe by early explorers who picked them up in South America and passed through Guinea on the return voyage. The pig nomenclature refers to their squealing calls, much like a squealing pig.

Guinea pigs have been domesticated for centuries. The Incas kept them as pets and emergency food sources. Many native South American people still maintain “herds” of them in their villages.

Guinea pigs are primarily fed a pelleted diet. Guinea pigs are unique because they are the only mammal other than primates that does not metabolize vitamin C from sunshine. Because of this, their diet must be supplemented with vitamin C. Manufactured guinea pig pellets have stabilized vitamin C added to them. It’s safe to feed guinea pig pellets to rabbits in an emergency situation, but never feed guinea pigs rabbit pellets because they may be lacking in vitamin C. We suggest supplementing the daily diet with a high quality multivitamin if the food blend you are providing is not vitamin fortified.

Fresh timothy hay should always be available to help grind down a guinea pig’s ever growing teeth. Their diet should also be supplemented with fresh vegetables. Treats can be offered but should not exceed 20% of the total daily diet.

Guinea pigs can be kept in cages or aquariums. Guinea pigs are fairly large and if housing them in a cage, the tray will need to be fairly deep to prevent the bedding from being scattered outside the cage.

Aquariums with wire screen tops are much more commonly used. The screen top isn’t really necessary since guinea pigs cant jump or climb, but it helps keep other household pets from harming the guinea pig. Aquariums work great because they’re difficult for guinea pigs to escape from, they keep the bedding in place, they’re easy to clean, and the provide a clear view into the guinea pig’s environment. A layer of bedding material should cover the entire bottom of the aquarium and a hiding space should be offered for the guinea pig to retreat to when needed.

Guinea pigs are social animals. They do well in pairs and large groups. If kept as a pair, it does not need to be a mated pair. Two male guinea pigs will get along just as well as two female guinea pigs.

Guinea pigs are easy to handle. Gently scoop the front of the animal into the palm of your hand while placing your other hand over the back of the animal and lift. You can also cradle the guinea pig and hold it close to your body so it doesn’t fall.

Various bedding options are available from wooden chips to alternative fibers. We recommend aspen shavings or paper fiber. Both of these types of bedding help reduce the risk of respiratory problems and other issues associated with the phenols contained in aromatic wood shavings.